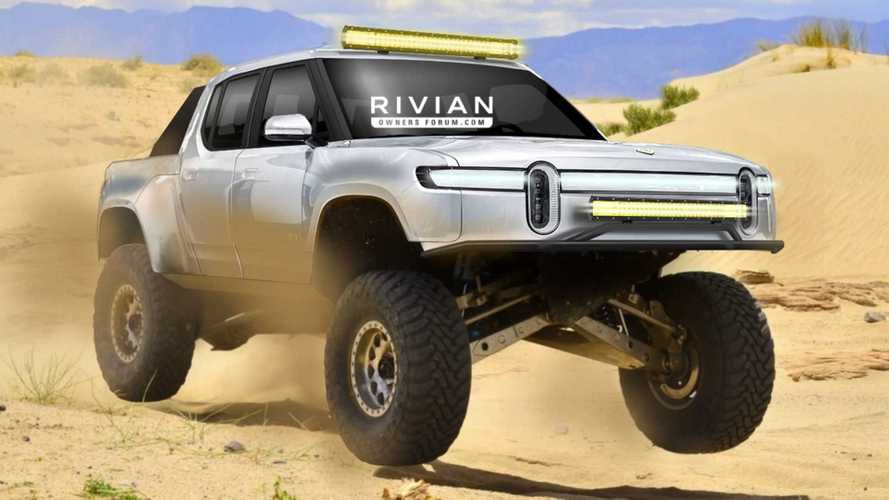 Exploring the R1T's adventurous side with a performance twist.

Rivian aims to beat Tesla to the electric trunk punch with the swanky R1T it unveiled about a year ago ahead of a market launch set for 2020. With juicy official estimated specs such as up to 750 horsepower, 0 to 60 mph in 3.2 seconds, and up to 400+ miles of range, we’re looking forward to seeing the zero-emissions workhorse on the streets.

With a maximum towing capacity of 11,000 pounds and a wading depth of over three feet, the R1T aims to be a versatile vehicle not just a quick truck with an impressive amount of range. Rivian’s highly anticipated launch of the EV has opened the floodgates to many independent artists eager to explore new possibilities for the vehicle to follow the company’s own camper conversion shown at this year’s Overland Expo.

The folks over at the RivianOwnersForum wanted to take the R1T to the next level and have envisioned a hypothetical racing version to compete in the Baja 1000. With a massive ground clearance, beefy suspension, and off-road tires wrapping beadlock wheels, the off-road-ready electric truck looks the part and packs two spare wheels in its bed.

It retains most of the styling of the future production model and would make the most sense in its highest specification with the quad-motor setup and the massive 180-kWh battery pack. The real electric truck promises to offer a maximum ground clearance of 14.1 inches in off-road mode, along with approach and departure angles of 34 and 30 degrees, respectively. Needless to say, the motorsports version would improve on these numbers and logic tells us it would shave off some of the weight compared to the road-going vehicle projected to tip the scales at 5,886 pounds (2,670 kilograms).

Any future derivative would likely greatly depend on the commercial success of the regular model, which will have to do battle with Tesla’s Cybertruck scheduled to be unveiled on Thursday, November 21.