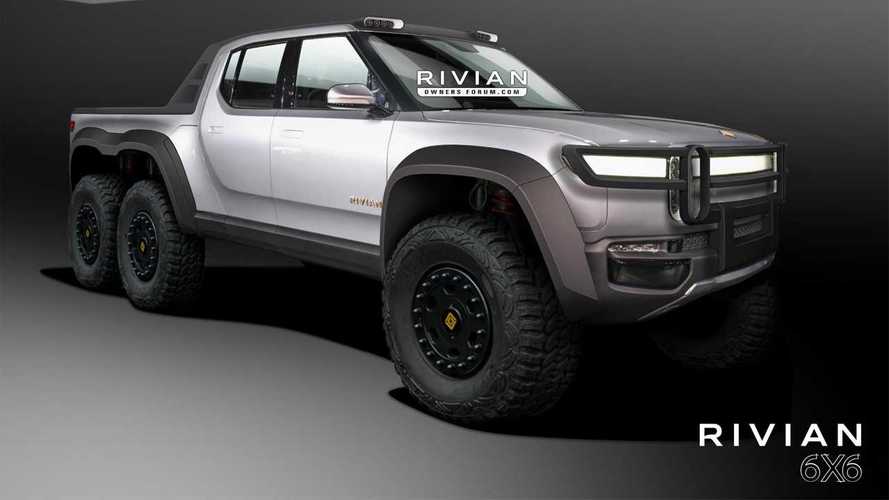 Forget the Tesla pickup, this rendering would be the real go-anywhere electric pickup

In a thread discussing what other models Rivian should make, the folks behind the Rivian Owners Forum imagined a crazy version of the R1T pickup with six wheels and a raised ride height. The resulting vehicle would probably too extreme for most people but looks fantastic.

Forum member St00k offered the idea of a Rivian "something like a Ford Raptor." The forum Administrator responded by posting these renders and commented, "we might have taken it a little overboard but this should work."

Compared to the standard Rivian R1T electric pickup, this rendering has quite a few changes to convert it into a more rugged machine. Up front, there's a subtle, custom brush bar that follows the shape of the headlights and bumper. A pair of LED light bars adorn the roof. A style bar on the side of the bed visually lengthens the cab when viewing the truck in profile. Large fender flares cover the bigger wheels and knobby off-road tires.

Rivian R1T Pull-Out Kitchen Is Real, Will Be Optional
⠀

As a major mechanical modification, the Rivian Owners Forum also imagines there would be an extra battery underneath the bed liner. Rivian already intends to offer the R1T with the biggest battery pack on the market by having an optional 180-kilowatt-hour capacity, and the extra one for this vehicle would boost the off-road distance even more.

Rivian is taking preoders now. The company plans to offer the R1T for prices starting at $69,000 before any tax credits, and production should commence in 2020.